Home »The Hippie Trail - The Journey of Life

"Where do you want to go with this car?"

The man taking a professional look at our VW bus appears skeptical. At our hopeful question about the suitability of the motor, he twists his mouth,

For a moment he seems to think we are joking, but then, when he realizes the seriousness of our answer, a grin both amused and incredulous pulls at the corners of his mouth. He shakes his head and grumbles: "I wouldn't even drive to Liechtenstein in this car."

Well, a promising start of our adventure to India would look different.

But one step at a time.

Plans and all sorts of problems

It is spring 1974, the motor of the old Simca 1000 is humming, mild spring air is drifting in through the open window, my thoughts are on the planned trip through Africa.

The first inquiries have revealed that we have to be prepared for serious problems. After all, the continent consists of countless countries with countless currencies, languages, borders, climates, and a visa must be obtained for each country. And it dawns on us that there are quite a few dangers along the way.

None of this is really reassuring.

We, that's Monika and me, both in our mid-twenties, both unbound and experienced travelers. 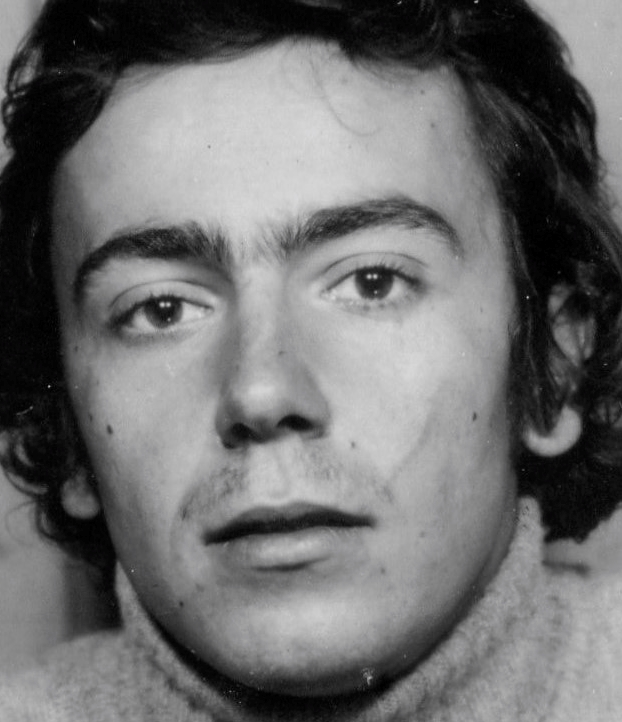 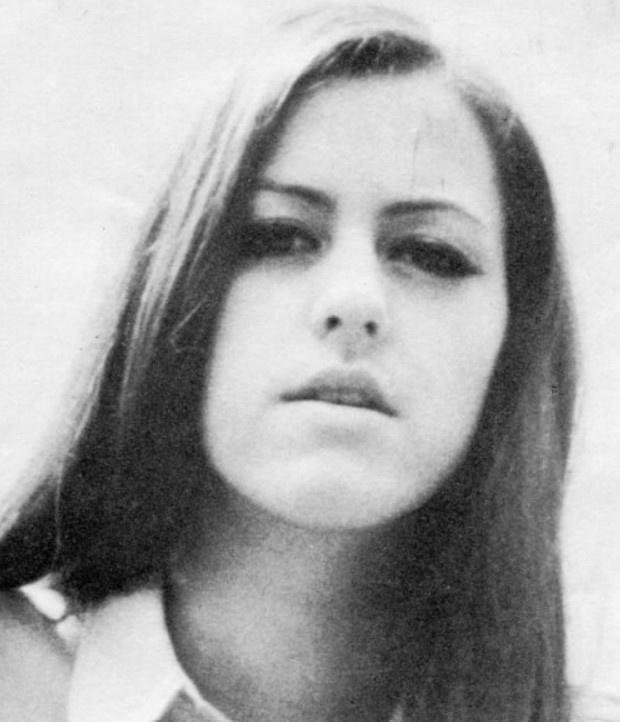 And now, in this spring of 1974, we're ready to shift gears a little higher. To push ourselves to a new level, so to speak.

We have nothing else in mind than conquering the world.

But well, Africa is still in the spotlight, until out of the blue the realization hits me that we are not going to take a trip through Africa, but a completely different one.

It takes a while before we dare to inform our parents and friends about the planned enterprise. The reactions are as expected. "Have you gone mad?"

And yet, a few months later, having encountered numerous unforeseen problems, we are finally ready for the great adventure in mid-September 1974.

Driving overland to India and Nepal in an old, rather run-down VW bus.

But before that, we have a few difficult weeks with countless problems to deal with. 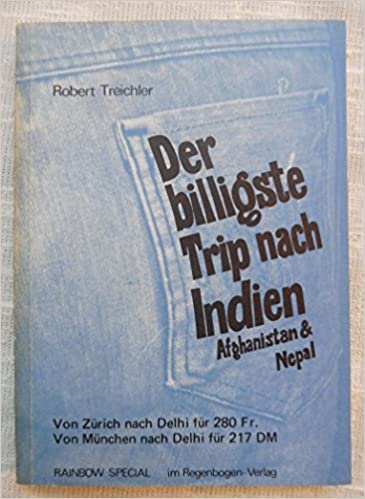 It's not that we don't bother about the route, the countries to pass through, the currencies, the conditions, the risks and problems to be expected, on the contrary. But in fact we don't have time to do so.

We are satisfied to own the famous guidebook to master the hippie trail, Robert Treichler's magnum opus, "The Cheapest Trip to India, Afghanistan, and Nepal."

The several-hundred page guidebook not only provides detailed tips and information on every conceivable topic, it just informs you about everything. About roads, places, sights, places to stay, currencies and anything else. It will be our companion in dark hours, our lighthouse, our guide, our encyclopedia, our entertainment, our conversation partner.

With that, nothing can possibly go wrong.

But well, even the best travel guide is sometimes of little use, as we have to find out very quickly and painfully.

From Zurich to Tehran

From Tehran to Lahore 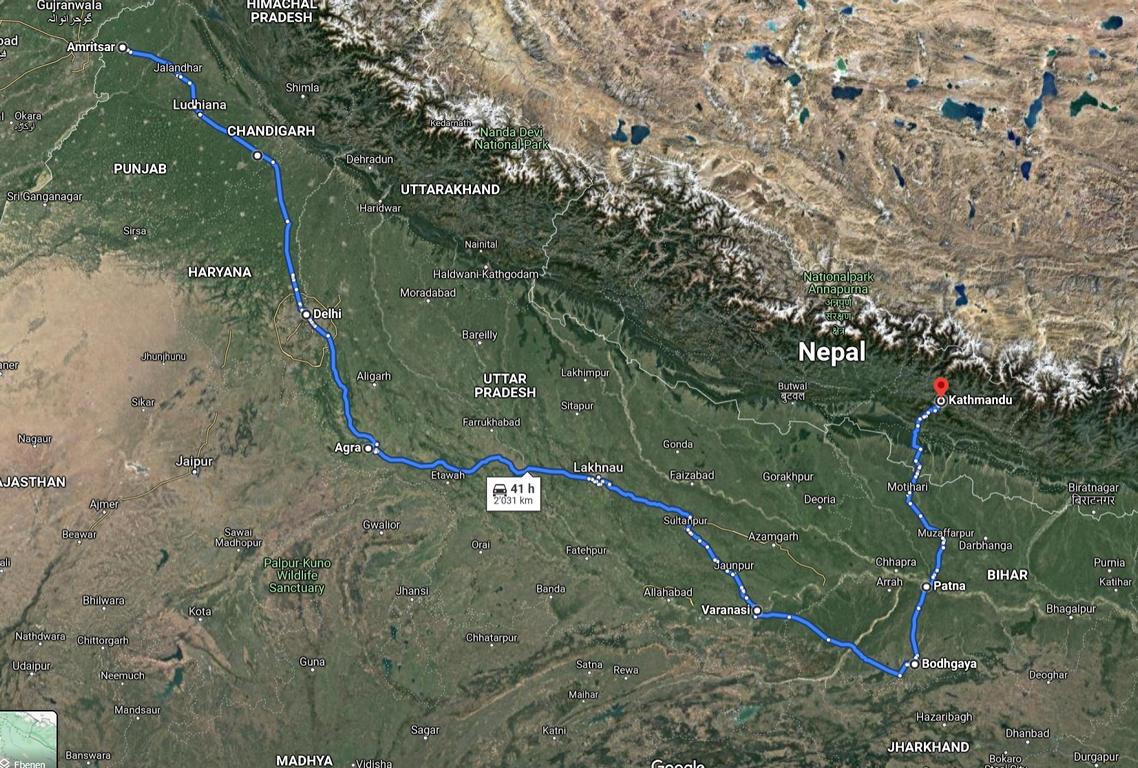 As you know, the road from idea to realization is paved with many setbacks and doubts.

There are a couple of fundamental issues we have to deal with right from the start.

First, we have absolutely no money, at least none that is slumbering in a bank account and can be magically withdrawn to finance our stupid dream. I'm still in the middle of my studies (another problem) and work hourly. So we have to hustle, work hard, put every centime aside and watch with satisfaction and occasional frustration as the money becomes more or doesn't.

But sometimes luck favors the foolish. In the fall of 1973, the Rolling Stones give a long-awaited concert in Berne, we of course have tickets and much anticipation, but unfortunately not only for us, but also for a number of friends. A few days before the concert, our travel bags and also the Stones tickets are stolen from our old VW Beetle (I still hope today that the thieves at least attended the concert).

So I reported it to the police, declared the stolen paraphernalia including tickets, in addition some painful frustration, because of course the concert was sold out (but it was to remain the only one I missed; in the meantime I arrived at a double-digit number of Stones concerts).

So far so bad.

After half a year, we made a careful inquiry at the police station, but they could no longer find the documents relating to the theft. Apparently there had been a reorganization shortly before. It's a well-known fact that things occasionally go missing in the process. Bad luck, you might say, but now the tide was turning in our favor, with the insurance company proposing a compensation package that was far higher than the original amount. Eureka!

And so at least the monetary problem could be alleviated by the gracious help of the Stones.

The main problem, of course, is the vehicle that is supposed to take us to India.

You have to imagine the time around 1974: the so-called Hippie Trail has been known for some time, the route leading from Europe via Turkey, Iran, Afghanistan and Pakistan to India and Nepal. A relatively harmless trail at that time, even though all sorts of strange stories started to be rumored. Of robberies, corrupt officials, food poisoning, accidents, attempted fraud in exchanging money. The list could be continued at will.

Of course, that doesn't stop us from pursuing our plans.

There are a number of options to get to India.

You may join the transport by bus or truck, spending the trip on the uncomfortable and, depending on the weather or season, frosty cargo bridge. A luxury we do not want to indulge in.

The alternative of driving your own car is considerably better, preferably, as most India drivers do, with a VW bus. By far the most trouble-free vehicle of all. Air-cooled (so no radiator and coolant), easy to maintain, generous to even the worst gasoline.

Our search for a suitable vehicle eventually leads us up to the Forch near Zurich, where a young man introduces us to the advantages of his not really handsome vehicle. We, not knowing anything about toots and bubbles, are easily persuaded and actually strike a bargain. As it turns out later, not our best deal.

I quote from my diary:

The purchase of our bus is ill-fated from the start. First of all, we are happy to get from Forch to Altstetten in one piece. During this ride, the first doubts about the suitability of our vehicle arise, which we have just purchased for a lot of money. In the course of the weeks before the start, more are added.

We should have known. The signs are there, the omens, the hints from heaven. But who or what can stop two young absolutely clueless people determined to do anything to realize the dream of their lives?

All in all, the time before departure, i.e. the last two months, is a real pain in the ass. We work like maniacs until just before the start to add to our budget. In between, a lot of hustle, stress and the like. Then three days before departure the big bang - our passports have vanished.

It is important to understand that it is best to obtain the necessary visas, and there are many, before departure. Especially the visa for Afghanistan is mandatory. But since there is neither an embassy nor a corresponding consulate in Switzerland, one must obtain the visas in Bonn at the Afghan embassy. But three days before departure the passports are missing, so frantic inquiries, but at the embassy no one knows anything about two passports from Switzerland.

There is basically just one way to solve the problem, you have to apply for new passports. As I know from painful experience, the Swiss passport authorities are more than just suspicious in this respect, but somehow we manage to sweet-talk the responsible person into issuing two brand new passports. And by the way - after our return, the two missing passports have reappeared. They were found in a drawer, we are laconically informed.

And another great anecdote: if you plan to spend a prolonged period of time abroad, you have to deregister at the relevant office in Zurich. The elderly lady at the counter, eyeing me and my long hair more than suspiciously, asks me for the address abroad. After all, there is a corresponding field on the form that must be filled out.

"We're on the road, there's no address." Her expression suggests that I am now violating all the rules of civic virtue. She probably would like to have me arrested.

“I need an address, there is a field that needs to be filled out. Where are you, for example?”

"Well, for example at the campsite in New Delhi."

And so the good lady finally finds an address for her sacred field: "Campsite New Delhi". Isn't bureaucracy just wonderful?

But then - the departure

Eventually, to our own surprise, everything is ready - the VW bus with its dubious engine, the probably far too puny financial resources, the equipment that will later prove to be useless in many respects, but we are unaware of all that at this point. Thanks to Heaven!

And so the morning of September 17th, 1974, dawns, we as tired as can be imagined, worn to the point of exhaustion, but still with enough guts to conquer the world.

And here starts the trip of a lifetime ...